The same week I got my new art tablet, I had finally overclocked my computer and received my Oculus Rift in the mail. It’s not to hard to imagin that it was more of a Tech In Pinkerton than an Art In Pinkerton kind of week. For the last two weeks, I have squandered quite some time playing with my new VR gizmo which means I spent less time on other, more artsy endeavors 😉

Tech Nerd Note: Years ago when I built my computer, I bought a CPU chip (I7-2600K) that was designed to be overclocked but I never bothered since it was already (and still is) very capable. I finally gave it a go and ended up boosting the speed from 3.4 Ghz to 4.4Ghz (about 25% more power) with very little change in temperature. All I had to do was change two settings in the BIOS and voila…instant faster computer.

I also upgraded my computer desk and arranged my setup so it’s much more aesthetically appealing and has space for using the Oculus Rift.

It’s not all for naught

I did find time to play with my new tablet though. I took its arrival as a cue to make the transition over to Photoshop from GIMP. I do have to say, it’s has taken a few weeks for me to adjust to how different it is. I feel like I have taken two steps back but I know I will catch up to speed pretty quickly. I just have to do a little more “google research” to figure out how to do things than I did with GIMP in a long time.

Now that I had my new art tablet, I really wanted to see what it could do and clicking individual pixels for the Arena Depixelization Project wasn’t going to scratch that itch (sorry it’ll be back on the agenda soon). I’m not sure if I mentioned this, but my favorite video game of all time is The Elder Scrolls: Morrowind. Atmospherically, it’s an amazing setting. However, it’s from early 2000s and a little clunky. The 3d models of the characters are blocky like those poseable wooden art figures (composed of multiple seperate 3D meshes). The textures are low res, blurry, and sometimes quite questionable in their construction. As can be seen in my Morrowind screenshot directory, I have experimented with that game before.

What is old, is new again

I had a (kind of) new idea. I wanted to see if I could add a Borderlands style look to that game. It’s is only meant as  a proof of concept rather than a full mod though. As can be seen in the screenshots for my various projects, the cartoon concept a recurring theme for me (it just takes different forms). It’s an “easy” way to turn an art direction on its head and give it a little more interest. The difference this time from the last time I fiddled with Morrowind’s art assets is that, besides having Borderlands as an inspiration, I’m not brand new to computer graphics this time. I have completed a few textures already but will save that for another post.  – Martin

Can you tell I’m procastinating on the doors 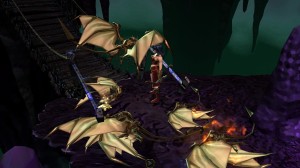 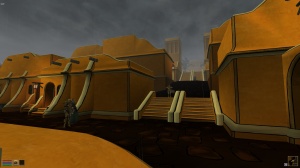 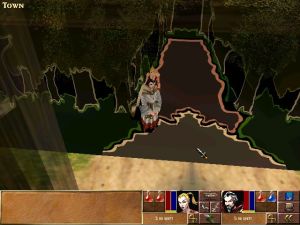